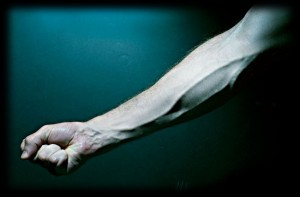 It seems like every bodybuilder and weightlifter wants to have a more vascular appearance. In other words, they want the added impressiveness of bulging veins on a massive and ripped body. This vascularity certainly shows to the world that you are a beast.

Of course, a lot about how much veins can be shown is determined by genetics. Even still, everyone can work hard at building larger veins and making them stand out. Plus there are some supplements that can aid in this task. Some are vasodilators, some improve blood flow, and others increase pumps.

One of the best vascular aids currently on the market is Citrulline Malate supplement. This supplement operates as a key intermediary in the urea cycle and helps to rid the body of both ammonia and lactic acid, which helps to maintain energy levels in working muscle cells. It is also known for promoting the release of nitric acid, which is thought to be responsible for increasing the intensity of pumps. It also acts as a vasodilator, helping blood vessels to open and expand.

The best way to take this supplement is right before your workout (about 30 minutes before training). The generally accepted dosage range is between 5 and 8 grams.

Co-Enzyme Q10 is also thought to be a very effective vascular enhancing agent. This enhancement is especially true when it is taken as part of your pre-workout supplementation routine. Additionally, it is a powerful antioxidant and can help to rid the body of numerous poisons and toxins. An even more potent form of this powerful enzyme is Ubiquinol. These supplements are both thought to work by their removal of free radicals in the body, making blood flow much more efficient.

Another very popular method for increasing vascularity with vascularity supplements is the use of Nitric Oxide or NO enhancers. There are a number of these which have, in recent years, been touted as some powerful pre-workout drinks or energy supplements. Probably the most effective of these has been BSN NO Xplode. The Nitric Oxide has the capability of enhancing blood flow and opening up the veins.

This supplement is well known for the ability to increase energy. Since it is also a nitrogenous substance, the thought is that this partly explains its positive effects on muscle pumps and improved blood flow. Athletes in all sports, from strength to skill and speed events, have taken notice of a number of benefits of Creatine including the ability to produce a more vascular look.

How to Increase Vascularity

All of the above presupposes hard training and an effective nutritional routine. Obviously, in order to achieve a goal like added vascularity you really need to support the body. In addition to training and nutrition, make sure to get enough rest and sleep; rest time is when recovery and muscle/vein building actually occurs.